Glorious Emperor Constantin the Great, one of the most prominent rulers of the antique world, the originator of Christianity in this region, and the founder of Constantinople, had enjoyed in the hot bath, the hot water from Niška Banja, at the beginning of the IVth century. Water was delivered through lead pipes to the Emperor’s luxurious summer house called Mediana, built at the half way between the Spa and his native place Naissus, nowadays Niš.

The story about Serbian dynasties at Niška Banja, goes back further in the past. Stefan Nemanja, the great Serbian priest and the founder of the dynasty of Nemanjić, welcomed in Niš, in July 1189, Czar Friedrich Barbarossa and his crusaders on their campaign to the East. Stefan Nemanja presented the Czar, and his army equipped for the long journey. It is hard to believe that Stefan Nemanja did not take his glorious guest to the hot springs of the nearby spa.

Niš region was strongly connected to the dynasty of Obrenović, while it was under the Turkish power, for thanks to Milan’s merit it maintained commercial ties with Vienna and Pešta . When the Serbian army, under his command entered the city in 1878 and connected Niš to Serbia, the citizens of Niš praised him as the liberator. ” Old master” and “young king“ – that is how people called Milan and Aleksandar – they have always been dear guests in the city of Niš, and a monument was erected to the king Milan and liberators, in the center of the city, in 1902. In the liberated city, commerce and handicraft started again. Shops, barrooms and narrow lanes were crowded with people while zurle (type of woodwind instrument) and daire (national instrument) were heard from everywhere. It was a custom to go to “teferič” (gathering ) to the Spa on Sundays and holidays, where people sang, listened to music, danced “čoček” (belly dance) and had a good time till late in the night. People made jokes. talked about old times, colorful gowns mixed, both Serbian and Turkish. Classes were separated. People went back to the city by coaches, late in the night. Well, at such Niš and such Spa, two Kings used to come, last descendants of the Obrenović family. 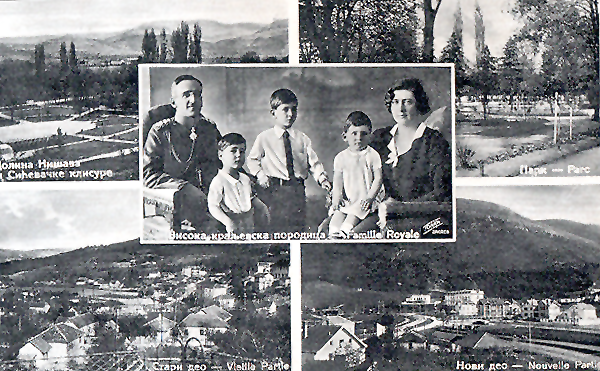 At the thirties of the last century, Niška Banja started its sudden development into the spa-climate sanatorium like most of European Spas that were prestigious places and places of gathering of the jet-set members. On the spacious plateau at the foot of the Koritnjak mountain, at first the monumental building of the Spa bath was built, today’s “Old Bath” where relaxing smells of hot water and mud are still spreading. Soon after, rich merchants and first Serbian factory owners started building luxurious villas. and while Serbia was still recovering from the wars, they brought to the Spa, splendor, luxury and European way of living. The two hotels and one school, arranged park in front of the bath, trolley car connection with Niš from 1932. completely changed the setting of the small touristic settlement. New age in the development of the Spa and spa tourism has started. Just at that time, at the end of the twenties and at the beginning of the thirties, the King Aleksandar I Karađorđević was a regular visitor of Niška Banja and he usually stayed at “Jela“ villa, which was private property of Jovan Todorović, who was a court lawyer. Townsman call it nowadays “the King’s villa”.

Before this villa was built in 1931. the King was the guest in the house of one of the spa’s head of a household. He used to come without pomp or without sending word of his arrival. Guardhouse in front of the villa and the hoisted flag of the Kingdom of Yugoslavia, were the only signs that the King was in the Spa. The King used to walk without escort. he made friends with townsmen and he used to visit the spa’s heads of the households to talk to them and taste their vine. That is why nobody was surprised to see the ruler, at some public celebration, to dance in the kolo. No matter how much the townsmen enjoyed the King’s visits the King himself had the best memories from the Spa. 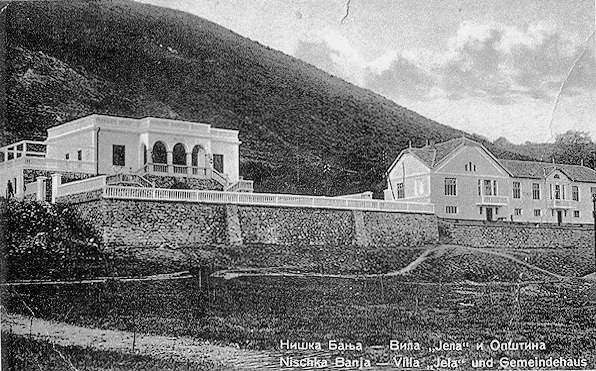 In 1934, the King Aleksandar started his last journey from Niška Banja. He went to Marseilles and he was assassinated. This news was the most sad at Niška Banja. Townsman were decisive to name the Spa after their favorite King, but the circumstances had changed. The new regime came and the new visitors stayed at villas – refugees and wounded in the war.
Niška Banja was a favorite spa for three Kings and two Serbian dynasties. In honor to rulers who with their presence and kingly dignity left the spirit of elite to the Spa, thankful townsmen erected the monument – drinking fountain and named it “The Three Kings”.

More significant development of the Spa sanatorium started from 1923., when the state took over the concern about the spa. In 1926. Mr.Đoka Mihajlović,M.D., regional sanitary administrator, was appointed the spa physician. The spa administration sent him to Czechoslovakia, to specialize in balneo-physical therapy for the treatment of internal diseases, in 1928.

During 1935. the New Bath was built (today it is called “The Old Bath“) that made the opportunity for more visitors to come.
In the period between 1935. and 1940. the spa had its bloom, the average number of visitors, was above 5.000 visitors, per year, and in 1938. there were 6.265 visitors . At that time there were 510 beds in hotels and 530 beds in private houses, one physician was employed and four physicians used to work during the season.

There were four hotels and two villas at the spa sanatorium, in fact 570 beds, in 1950. It had been emphasized that according to the number of visitors, the lodging capacities were insufficient, even with 800 beds at private lodging.
At that time, there were a lot of misunderstanding and absurdity, agreements between Republic and Community health insurance on one side and Hotel Enterprise “Niška Banja” on the other side, were signed about the lodging of patients. Spa sanatorium offered only health services.

At the period 1954-1956. there were average 17088 visitors at Niška Banja, so, according to that after Vrnjačka Banja, Niška Banja became the most visited one, in the FPRY.
In the first few months in 1963. Niška Banja got the status of the Spa.
At the end of January in 1966. The Spa and Climate sanatorium “Niška Banja“, was altered in to Natural sanatorium “Niška Banja“. At that time, the change of work was also registered, – “Treatment and Rehabilitation of Rheumatic and Heart Diseases”, the Director was Dragoslav Koković, M.D.

Municipal Assembly of Niš and Regional Economic Court in Niš, made a decision of the registration of the new name of the institution, that is “The Institute for Prevention, Treatment and Rehabilitation of Rheumatic and Heart Patients” , and Prof. Dimitrije Mihajlović,M.D. became the Director of the Institution, in December 1966.
Establishing the Institute, significantly improved the number of medical procedures, so in comparison to 1961., when there were 12.995 visitors, in 1971. their number almost doubled, there were 23.476 visitors.

Building the stationary “Radon” in 1975. with completely new and contemporary equipment, the new period in the work of the Institute started, as the first class educational, scientific and health institution.

In December 2006. renovated hydro section was open at the stationary “Zelengora”, a part of that is a recently built new swimming pool with a movable bottom, that made easier the use of thermomineral water to patients with difficulties in movability. At that time, the new plant for heating started to work, which uses thermominelal water.

In April 2007. wellness Center “Sense” was opened, at the stationary “Radon”, with all contents as in similar contemporary European Centers, that has modernized the offer of the Institute “Niška Banja“.
Current official title of the health institution is “Institute for Treatment and Rehabilitation “Niška Banja“, Niš.